Avoiding the Spirits - Did Confucius Believe in Spiritual Beings? 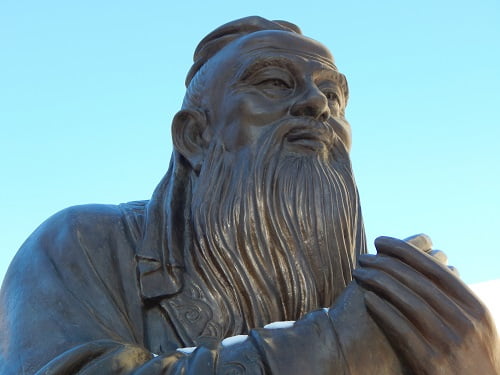 I. Confucius would not speak of the extraordinary things, feats of strength, disorder, and spiritual beings

In scripture No. 21 in Chapter Yong Ye of the Analects, Confucius stated that, "To devote oneself earnestly to one’s duty to humanity and, while respecting the spirits, to avoid them, may be called wisdom." In scripture No. 20 of Chapter Shu Er of the Analects, Confucius stated that [he] "not speak of the extraordinary things, feats of strength, disorder, and spiritual beings." The general public is of the opinion that Confucius does not believe in spiritual beings. Hence, when we tested Ms. T with the word "Confucius" for the first time during a finger reading experiment in August 2000, we were all stunned when she witnessed a paranormal activity. She first saw a dark human shape in her mind's eye, then the human figure disappeared and was replaced by the characters for Confucius ("Kongzi"). The process in which the paranormal activities took place was exactly the same as the result for the characters for "Laozi." No matter how many times we repeated the experiment, she always saw a dark human figure before seeing the characters for Confucius. As it turned out, Confucius had also established a website, and the stature of which seems to completely on par with that of Laozi.

We also tried "Mencius (Mengzi)" and "Zhuangzi" but no paranormal activity was seen. The two words were directly written, showing that the process did not work for "Ya Sheng," or individuals who were second in morality, ability, and wisdom to a sage. Perhaps only the founders of distinctive schools were powerful enough to create websites at the information field. What was going on? Was it because Confucius had also trained to a higher level, allowing him to connect to the web? Or was this caused by the "collective unconsciousness," as coined by psychologist Carl Jung, and the website in the information field was formulated as a result of the collective faith and worship from the Chinese ethnic group for Confucius for over two thousand years?

II. Did Confucius Not Believe in Spirits?

Did Confucius not believe in spiritual beings? In scripture No. 33 in Chapter Shu Er of the Analects, Confucius was described as having fallen ill one time, and Zilu was going to pray for him. Confucius had asked him, "Did you really pray?" Zilu replied, "I prayed to spiritual beings from all areas and fields." To which Confucius replied, "Then I had already been praying all along." Needless to say, during those ancient times, a patient needed to strengthen his/her mind and information level and to adjust any unfit state before he/she could be cured. They seemed to have believed in a world outside of their physical world.

Confucius had stated in one of his classics, Xici (Xicichuan; 繫辭傳) that, "What is above this physical world is referred to as "Tao" while everything below are vessels." To him, humans, objects, animals and plants were all vessels, and there was a world ("Tao" or "a path") above our physical presence. Professor Song Guangyu from Fo Guang University also had some in-depth descriptions on the subject matter in his new book "Lun Yu Xin Jie (論語心解; "Understanding Confucian Analects from the Heart"). For instance, everyone began their studies of the Analects from the "Xue Er" scriptures. But what was the purpose of learning? Were we striving to learn the only contemporary literature at the time? Or were we aiming to learn what the sage had deemed to be sacred? Based on the traditional Confucian philosophy of "a sage in the inner sphere, a king in the outer sphere," we should be focused on learning things that were sacred to the sage. "Sage in the inner sphere" refers to being perceptive like kings from ancient times, while "king in the outer sphere" indicated that we should employ such perceptive ability to observe the functioning principle of the outer universe. In other words, to govern the country through "Tao." In the language of modern science, the Confucian learning method was to communicate with the information field and to govern the country through the collective intelligence of all beings.

But what about when Confucius stated, "While respecting the spirits, to avoid them, may be called wisdom" and "Not speak of the extraordinary things, feats of strength, disorder, and spiritual beings"?

The sequence of each chapter in Confucius' Analects followed the same logic as modern literature. They were arranged in a logical manner with stories and phrases that corresponded with one another. Therefore, one shall not focus on the meaning of one specific phrase when interpreting its meaning, but rather, to also analyze the previous and following sentences as well. Unfortunately, when we were learning about basic course materials such as the Analects and Mencius during Chinese Literature course in high school, the phrases were mostly taken out of their context and interpreted individually, leading us to misunderstand the true meanings of the Analects. In "To devote oneself earnestly to one’s duty to humanity and, while respecting the spirits, to avoid them, may be called wisdom," "wisdom" refers to doing what is needed, and to respect the spirits while taking care not to be overly dependent on them so as to retain our personal space and thoughts. In other words, Confucius did not reject the existence of the spirits, and only cautioned against being overly dependent on them.