What is the science of consciousness studying?

On April 2-7, 2018, I attended the "International Conference on the Science of Consciousness" in Tucson, Arizona, USA This gave me the opportunity to understand the fields included in the current international scientific research on consciousness. After statistics,the fields are roughly divided into the following six categories: quantum biology, animism, anesthesia and psychedelics, dreaming and meditation, inner conversation, and artificial intelligence AI.

The brain nerve cell wall is composed of many nanovascular bundles (~14 nanometers) that can form a quantum state. When sensory stimulation is introduced to the brain's neural network, it will produce an ordered quantum state with a superposition of different quantum states. When time passes, the external environment such as gravity will affect the evolution of these quantum states. The gravitational energy difference E caused by the distribution of matter in different states in different spacetimes is equal to the spacetime interval S between the two states (physical constants such as the speed of light and the universal gravitational constant make it 1), the superposition state will collapse to show the only definite state. Consciousness is generated when the objective reduction OR, that is, when the quantum state diffuses to the change of gravity, it meets certain orchestrated conditions. The macroscopic quantum wave objectively collapses and is referred to as the "Orch OR" mechanism as shown in Figure 1. The brain's consciousness is produced when the macroscopic quantum state collapses, then a small part of the microtubule bundle begins to enter the quantum state again. With consciousness gradually disappearing, the brain can only wait for the "Orch OR" mechanism to produce new consciousness. Therefore, thoughts in brains come in repetitive waves. 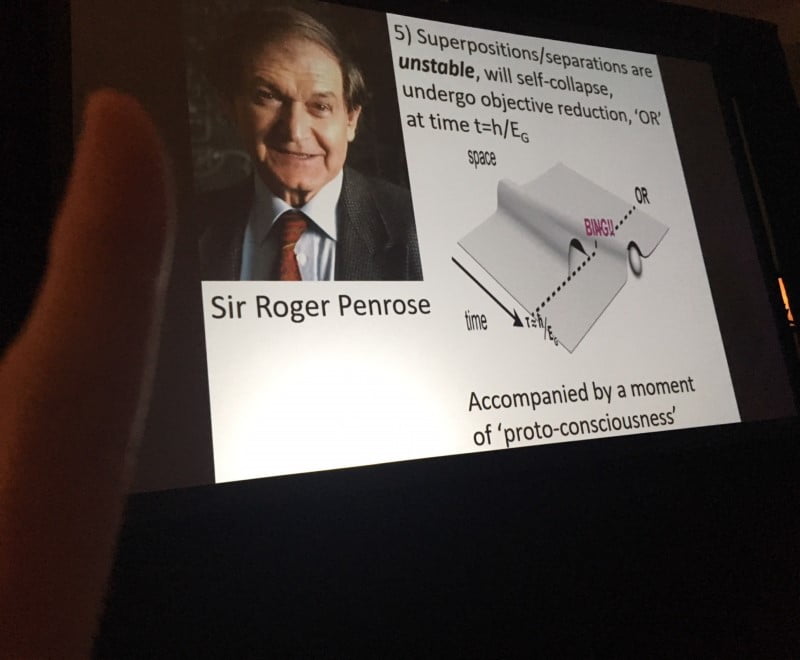 Panrose and his Orch OR consciousness model

I think their model is close to the essence of consciousness, but the opposite is that consciousness is produced when a superimposed quantum state is formed, and disappears when the objective shrinks. As the superimposed quantum state is a complex state, the imaginary consciousness scans the neural network structure that enters the quantum state at this time to produce the contents of consciousness such as memory, thought, judgment and action. Sometimes the experience buried in the neural network will produce inhibitions, stopping it from being impulsive and giving suggestions to limit your actions. Sometimes quantum waves will escape into the void, travel the universe for inspiration and produce innovative ideas. (Please refer to the article: Complex Spacetime) After the quantum wave objectively collapses, the material space operations resume, waiting for the next occurrence of the ordered quantum state of the vascular bundle, namely the appearance of consciousness. After more than 20 years of development and experimental discussion, more and more scholars have begun to accept this model. Many papers at this conference echoed the quantum consciousness model from based on physiological, philosophical and even vascular molecular experiments. Naturally, some scholars opposed. The philosopher Davis Chalmers of New York University for example, challenged the "Orch OR" mechanism with simple logic at this conference, claiming that explaining consciousness with this concept is incomplete and needs correction. This is in line with my theory of consciousness. Only when you enter a quantum state will you have consciousness, and quantum collapse will cause your consciousness to disappear. After the conference, I wrote a letter to support his inference and introduced my model.

2. Panpsychism
More and more neuroscientists and philosophers stopped believing the materialistic point-of-view. They believe that the material brain is primary and consciousness is a matter emerging from the operations of complex neural networks, making it secondary. People who believe that subjective feeling and awareness are the basic characteristics of any object itself, giving it a name called "qualia." This view is panpsychism , but panpsychism has encountered three major difficulties:

(1) Do elementary particles such as quarks, electrons, atoms, and molecules have qualia? (2) To what extent do the assembled qualia of these tiny atoms and molecules have to be assembled to reach the complexity that allows for the production of an experienceable consciousness? This problem is also called the combination problem; (3) How does the brain combine these primitive qualia to form the consciousness that everyone experiences?

3. Consciousness changed by narcotics and psychedelic drugs
The injection of certain drugs can change people's consciousness. For example, anesthetics can cause people to lose consciousness, taking psychedelic drugs such as DMT can change people's consciousness and produce hallucinations. Therefore, it is necessary to study how these drug molecules affect the brain nerve conduction, and with which neural receptors they bind. The part of the brain the drugs affect is very helpful in understanding how consciousness is produced and where it is produced in the brain. The preliminary conclusion is that drugs will interrupt some long-distance information connections between neural networks. Originally, the brain processes information input in modules, and the feedback network connects different modules. Therefore, consciousness is the combination of module functions. Anesthesia makes people unconscious mainly by cutting off the feedback network, while hallucinations are more complicated.

4. Research on dreams and meditation
Consciousness is lost during sleep, but seems to be active again when dreaming. The same goes to the level of consciousness during meditation, which is less active. Therefore, analysis of brain waves in these states or changes in the brain's MRI spectrum of the network in idle state can further the understanding of the essence of consciousness.

5. Linguistics and inner conversation
For the average person, the left brain's temporal lobe controls the language, and the left brain's motor area controls the right hand. Only 1.5% of the people's language is controlled by the right brain. Since most people use the right hand as their predominant hand, motor skills and language control compete with the left cranial nerve area. A small percentage of the people's language area will be forced to scatter into different areas or even move to the right brain. This causes some people to hear the inner voice as if someone were talking to them. They are diagnosed with a mental illness as the result, which is the price of human language development.

6. Will AI develop consciousness
With the rapid development of artificial intelligence, Alpha go has defeated the world chess champion by becoming invincible in Go, and many routine tasks will be replaced by robots. The average person is more worried about whether robots will develop human-like consciousness and threaten human survival. The British physicist Roger Penrose (shown in Figure 1), namely one of the two scientists who first proposed the physics of consciousness in 1994, used an example of playing chess to illustrate that he thought this would never happen. This chess game is a tie game. People with a little experience in chess can know the result at a glance, but the introduced it to the most powerful chess software such as Deep Blue without the software being able to draw a conclusion, as the program did not consider a tie game in its design. In other words, the program does not know how to make judgement, so he concluded that AI will not develop consciousness on its own. With my consciousness model, AI does not enter the complex quantum state, with no imaginary number and no change of producing consciousness.