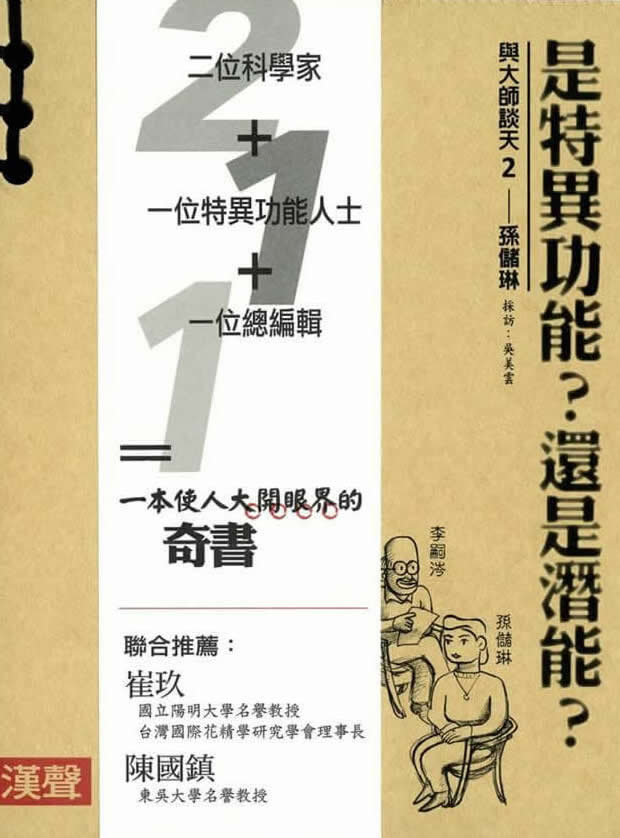 In 1995, I asked for a sabbatical from the National Taiwan University to relax and restore my energy, as well as trying to find a breakthrough in the research of superpowers. In fall, I took advantage of the vacation to accompany my mother on a visit to relatives and friends in China in September. I stayed in Beijing for about a week. At that time, the most famous person with superpower in China was Zhang Baosheng. I really wanted to meet him, but I had neither relation nor connection so it seemed impossible. Purely by chance, a friend invited me to dinner shortly before my departure. A local named Mr. Li was also present. He has superpowers, but different ones. I took the liberty to ask Mr. Li whether there is any way to find Zhang Baosheng. Mr. Li kindly gave me a phone number, saying that it was Mr. Zhang's number in the 507 Beijing Office. As a result, I gathered a few papers on my own Qigong and superpower research, preparing to go to Beijing to meet Mr. Zhang.

After arriving in Beijing, I accompanied my mother to visit relatives and friends as well as seeing sights. After a few days, I finally got the time to contact Mr. Zhang's secretary, Mr. Zhu. I immediately went over with my papers and business card. Mr. Zhu tactfully rejected my proposal to meet Mr. Zhang. Of course I was a little disappointed, but I still gave him the information and asked some questions. My business card and papers convinced him that I am a serious researcher instead of a random person with curiosity. He thought about it and said: "I'll tell you what: I would like to introduce you to a person who is as gifted as Zhang Baosheng, but I cannot guarantee we can find him now." He immediately made a phone call and introduced to him that I am from Taiwan. It was agreed that I would go there that afternoon. "You are in luck, he said. "Professor Shen and the person with superpower are both there today. They do not go to the office often." I thanked him from the bottom of my heart. He did not know me and could have ignored me, but he kindly offered help. On the one hand, I also felt puzzled. I had only heard of Zhang Baosheng in Taiwan. How could there be another person who is as gifted as him?

That afternoon I found myself on the campus of the Chinese University of Geosciences to meet Professor Shen Jinchuan, who is engaged in human science research, and Ms. Sun Chulin, who is "as good as Zhang Baosheng." It turned out that the staff of the China University of Geosciences came to Wuhan during the Cultural Revolution, and Professor Shen started the collaborative research with Ms. Sun there. After we exchanged opinions, Professor Shen showed me the results of experiments and videos they had done in the past. Each of these experiments stunned me. There were ones that broke through spatial barriers, bioengineering of consciousness (making seeds germinate and grow roots, etc.) and so on, which are simply incredible. At that time, my own research on the superpowers of the human body was only preliminary and concentrated on finger reading. I did not expect that superpowers could have such a complicated and amazing effect, and I did not expect one person to possess such a variety of powers. She has mastered at least sixty powers, each of which challenges the existing knowledge of physics and biology.

When I left the China University of Geosciences, I was so excited that I almost ran and cheered on the road. I have seen the vast prospect of human science research, with a large number of topics in physics, medicine, biology and evolution waiting to be explored! A hunter is happy when he sees prey, and the same is true for people engaged in scientific research. They are happy and impatient when they discover new research topics, and sometimes they cannot believe their luck! Thanks to the kind introduction by Mr. Zhang Baosheng's secretary, Mr. Zhu, I happened to be here today for the opportunity of meeting the researchers in China and creating opportunities for future collaboration. This meeting allowed me to take a big step forward in my understanding of the superpowers of the human body. I clearly knew that various special powers can be trained and developed on one's own, and that they cannot violate the laws of nature. For example, Ms. Sun found that it was easier to germinate beans in the experiment of seed germination, but she was unsuccessful in germinating of wheat. It never worked out after many trials. Later, she consulted an agricultural expert and learned that wheat must first grow roots before germinating. Therefore, she asked wheat to "grow roots, grow roots" before germinating. It really worked. This example also tells us that only relying on superpowers has its limits, and that knowledge can be used to achieve even more powerful results.

My collaborative research with Ms. Sun began in 1997. In order to prove that completely dead peanuts can be "resurrected, regenerated and germinate," I asked a professor from the Department of Horticulture of NTU to process Tainan #11 peanuts in a high-humidity and high-temperature environment to destroy all the cells before cultivating according to the normal procedure. None sprouted. I then brought the 30 peanuts in vacuum-packaging to Beijing. During the experiment, the peanuts were unpacked and taken out. The witnesses signed on the peanut skins and Ms. Sun Chulin started to do the experiment. It took 37 minutes for one of the peanuts to regenerate and germinate a 2.8 cm long sprout, and the signature of the witness is still clearly visible as shown in the video. This experiment completely subverted the definition of death and allowed me to see the power of the mind's eye. In the next few years, we also did experiments on "consciousness micro-sculpture" and "consciousness virus." Both succeeded and allowed me to see that the world of "Investiture of the Gods" may be true after all. Figure 1: While on a trip to Malaysia, someone on the bus gave Ms. Sun a fried peanut. After more than ten minutes, she unleashed her power and used her mind to grow the peanut into a peanut tree.

The encounter with Ms. Sun clarified my last suspicion that some of the ancient myths are actually facts. In 2001, the editor-in-chief of Echo Magazine, Wu Mei-yun, went to Beijing with me to visit Professor Shen Jinchuan and Ms. Sun Chulin. She recorded them in a dialogue detailing the history of Ms. Sun's ability to perform superpower experiments, as well as the methods and experience to decrypt the myths. This allowed readers to see the interaction between the mind's eye and the objects, which is the first-hand information of the myth's production process. It is a rare treasure to reveal the truth of the universe, and also a precious reference material for scientific research on the reality of the universe. It is a pity that I took over as the President of NTU in June 2005. In order to avoid controversy, I asked the editor-in-chief to postpone the publication of the book until the end of my term in June 2013. In March 2016, two and a half years after I stepped down as the President of NTU, Echo finally published the book titled "Potential or Superpower? " as shown in Figure 2. People who are interested in witchcraft and the magical world of Harry Potter are welcome to refer to it.