Substance of the Meridian and Acupuncture Points 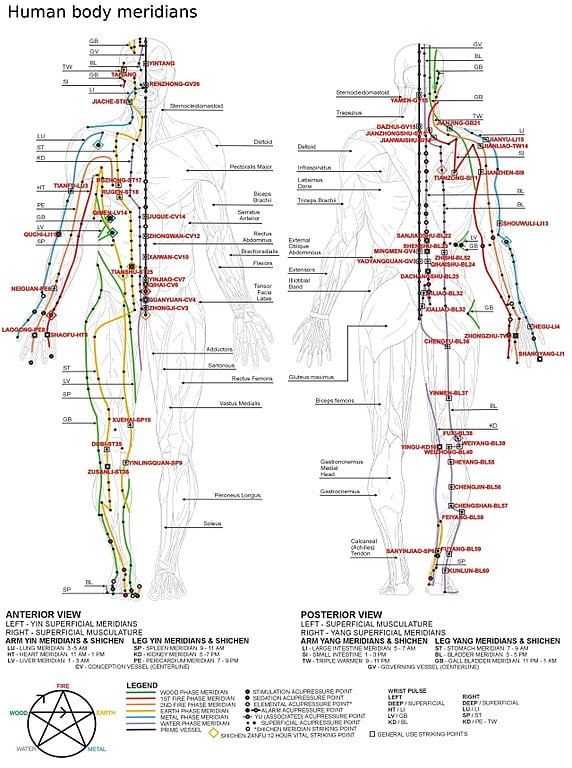 I. When were Meridian and Acupuncture Points First Documented?

The human meridian system is used whether during Chinese acupuncture sessions, or during Nambudripad's allergy elimination techniques, which is a form of information medicine. In addition, the phenomenon of the 24-hour energy flow throughout the body's meridians and collaterals according to the "midnight-noon and ebb-flow doctrine" is also utilized in these practices. But the real question is, does the meridian system, of which the Chinese medicine has emphasized for thousands of years, truly exist? Or was it simply a theory that the ancient folks created to express and explain the propagated sensation along the channels from receiving acupuncture treatment that they have observed?

In similar cases, the geocentric model proposed by Claudius Ptolemy (Claudius Ptolemaeus) in the second century, which explained the orbits of the Sun, planets, the moon, and stars in the sky was popular in Europe for 1,500 years, and it was not displaced until Copernicus' heliocentrism model. Additionally, 17th century chemists believed in the concept of "phlogiston" to explain the concept of burning. It was merely a theory and did not mean that it was real. As a matter of fact, it was proven wrong.

Similarly, presently, a branch of western physicians in China believe that the ancient people had indeed observed the propagated sensation along the channels and had therefore created a false theory of meridians and collaterals. These physicians believe that it is as futile to search for these channels as it was to search for the phlogiston, and that resources and manpower should be dedicated to the applications of the propagated sensation along the channels andacupuncture channel medicine.Though details of such arguments are beside the point, whether the channels (meridians and collaterals) exist should a question empirically solved by science. If these channels truly exist, we need to understand their actual structures, and what roles do they play in our physical health?

In 1950, Dr. Yoshio Nakatani from Kyoto University in Japan found that the acupuncture points were "ryodoten," or electropermeable points (EPP) for electricity, while the meridians were "ryodoraku," or "line of high electrical conductivity." He was the first person to find that the meridians and collaterals formed a network of high electrical conductivity throughout the body. In 1985, Dr. Zhu Zhongxiang from the Institute of Biophysics, Chinese Academy of Sciences, realized that the meridian network was also a "ryodoraku" for propagating low-frequency soundwaves. To solve the question of whether the meridians existed, Chinese Acupuncture & Moxibustion Association was formed in China in 1986. In that year, the research on meridians was also included as a key topic in the "7-5" (the 7th five-year-plan) of China's State Scientific and Technological Commission. Subsequently, this research was also included as a key topic in the two following five-year plans, "8-5" and "9-5."

Many indirect evidence regarding the existence of the meridian system was found during the three consecutive five-year plans. For instance, during "8-5," Dr. Hu Xianglong from Fujian Chinese Medicine Research Center chaired a large-scale survey with 63,228 participants, and found that consistent with ancient scriptures, the phenomenon of the propagated sensation along the channels 」、「氣趨病灶and using Qi to eliminate lesions were real. The ratio of its occurrence was 78%, which far exceeds the 25% that should have occurred from placebo effect. Acupuncture works best when Qi is involved.

At the same time, it was also found that the propagated sensation in some people was different from what was traditionally described. In addition, the "belts" of their propagated sensation were much wider than what was drawn in ancient scriptures; some formed a wide 2-5cm belt that was more sensitive in the 2-3mm in the middle. Its position may move horizontally along with the acupuncture position, and sometimes the belts themselves change as well based on their overall health. Dramatic changes in meridians and collaterals may even be observed in some individuals with particular diseases. Since the meridians did not have fixed positions like veins or arteries, it also made it difficult to see them even during dissection. Based on the aforementioned findings, large-scale research has proven the phenomenon witnessed by the ancient Chinese, and the physical experiments of sound, light, electricity, and water flow also indirectly proved that there seemed to be a completely different functional system in our bodies than the normal organs.

In 2003, Zhang Weibo from the Institute of Acupuncture and Moxibustion, CACMS, published results of animal experiment which indicated that the meridian system in fish had low hydraulic resistance and low interstitital fluid pressure (IFP) characters, and he proposed that the meridian system had high water conductivity. American scientists also published a paper in "Scientific Reports" magazine in 2018 that announced the finding of an unknown "new organ" in the human body - a fluid-filled "interstitium." Using the latest technology, they found a "fluid-filled highway." This news quickly went viral and started a buzz among all mainstream media and tech media in the United States. A research team headed by New York University stated that the newfound interstitium network is found throughout the body, and they are located underneath the surface of the skin, along the digestive tract, lungs and the urinary system, as well as around arteries, veins, and along the fascia that surrounds muscles. Many believe that this is the meridian system in Chinese medicine.

In 2014, our research team proved that message X existed in molecules (i.e. the molecular torsion field structure). Message X could penetrate walls and generate biochemical reactions with receiving molecules on the other side of the wall. At that time, we immediately inferred that perhaps this is the message being transmitted within the meridian system. The meridian system is a high-speed network on which the message X of various important molecules shall travel throughout our bodies before cell division. This is the true reason for the 24-hour energy flow throughout the body in the midnight-noon and ebb-flow doctrine. This high-speed network regulates the functions throughout our body parts; it is the fastest, most effective information communication system there is.

When message X is traveling along the high-speed network, it will disperse or get stuck when the road is uneven or comes across a forked route. Therefore, the most ideal network component would be a molecular structure with a long-range order (LRO). This orderly structure will make it easier to transmit shockwaves without decreasing them. They could be low-frequency lines of high electrical conductivity (like the ones found by Professor Zhu Zhongxiang), and could also have lower hydraulic resistance, like the low interstitital fluid pressure (IFP) in fish found by Zhang Weibo.

Dr. Qian Pingfan of Zhejiang Gongshang University studied nutrition. He discovered through laboratory mice experiment that the free radicals carrying oxygen molecules would gather at the meridian system of the mice. The free radicals would dispose of their excess electrodes at these orderly structures, and similar to what was described in the midnight-noon and ebb-flow doctrine of Chinese medicine, they would be concentrated at different organs at different times throughout the day. If these phenomenon also existed in human bodies, it could be used to explain Dr. Yoshio Nakatani's findings - that the meridian system was a line of high electrical conductivity. Since the meridians were conductive, they could quickly disperse of the excess electrodes from the free radicals to prevent the free radicals from attacking normal cells.

I personally believe that the most likely long-range order (LRO) is none other than the collagen molecule. It is a part of the blood vessels in bones as well as the main structure in binding muscle tissues and cells. In terms of spatial structure, collagen shows a special triple helix structure, much resembling a trigonal crystal. Three independent collagen peptide chains form a hydrogen bond through glycine, which connects the triple helix structure. This special triple helix structure in collagen ensures its mechanical strength. The triple helix is found throughout the body and account for 25% to 35% of all protein found in the human body; it is a structural protein used in binding cells to one another. The message X can use a vortex (similar to a tornado) method to circle throughout our body 24 hours a day, 7 days a week along the collagen's smooth long molecular chain, on which the message X will control and adjust the functioning of different body parts. It does not necessarily need to travel in a straight line; it could also travel in a zig zag as long as the path is accessible and barrier-free. In addition, the acupuncture points are connecting points between minor collaterals and the meridians. In other words, where message X is prone to be stuck. By adjusting the acupuncture points through acupuncture, we can untangle the network connectivity, thereby facilitating message X to pass and to improve our physical well-being.

Some anatomical evidence regarding the view that the meridian system is a motorized, orderly structure came in 2001. This evidence came from Thomas W. Myers' book in 2001, titled "Anatomy Trains."  After a significant number of dissections, Myers proposed that there is a myofascial network in the human body, and that the muscles and bones are not separately or independently moving, but rather, are functioning as a comprehensive model. Presently, nearly all textbooks depict muscles as upper and lower points on the bones when conveying muscular functions. These textbooks do not convey neural connectivity to blood vessels, nor do they depict the connections to the organs. Instead, they explain the functions of the individual muscles without elaborating on the vertical integrations between muscles and fascia or discuss their functions. As a matter of fact, Myers believes that the entire body would react when movement is generated by any part of the body. This reaction uses a network formed by connective tissues to transmit motor movement. Connective tissues are collagenous networks between cells, extraceullar matrix, and fascial net. Surprisingly, the part regarding fascial net is identity to many parts of the 12 major meridians in the human body according to Chinese medicine, and it is also very close to my substantial interpretation of the meridian network.

In the meridian model I proposed, meridians and collaterals were high-speed networks for message X, which is essentially a torsion field structure. Since torsion field stops whenever it meets water, it would be absorbed and would stop all motor functions when it touches water. Therefore, message X cannot pass through water flow, function under water, nor could it be transmitted in liquid-filled interstitium. Therefore, the new organ found by New York University may not be related to the meridian system.

The original intention of Aqive Technology to launch the Qi Box series  and  the Qi Crystal series is to help enhance the sensitivity to the meridian, and to better understand the sense of qi and its own aura.