When Other Beings Interfere with Finger Reading 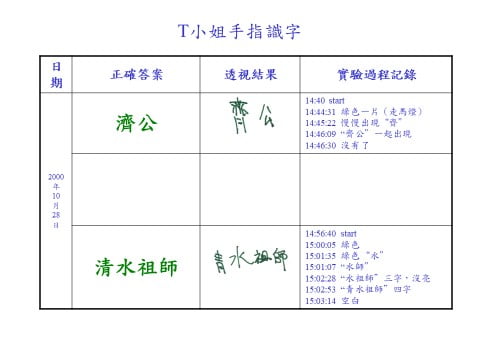 I. When Spirits Partake in Experiments

The information field is full of highly sentient information (spirits) and their websites, and we frequently click on their websites during finger reading experiments. Could they feel irritated, and as a result interfere with our experiment, leading to chaotic results? They could, and they do.

On December 28, 2000, a highly unusual phenomenon had occurred during Ms. T's finger reading experiment. The first sample contained the characters "Ji Gong (濟公 or Chan Master Daoji)" 」兩個字，「 "Ji Gong (濟公 or Chan Master Daoji)" which forms a sacred phrase. In the past, five tests on the same phrase had been carried out, and Ms. T had either seen a bright light, a bright figure, or a bright, shiny phrase. But this time, she shall the characters "Qi Gong" without any paranormal activity, as demonstrated in Image 1. It was as if the water radical in "Ji" had been erased, forming the character "Qi" before being transmitted to the brain for cognition.

The result of identifying the phrase "Falun Gong" was even stranger. The characters identified were "Lun" and "Fa," showing a reversal to the original sequence, while "Gong" was altogether not recognized. Ms. T often missed out on a character or two during her reading, but had never reversed the sequence of the characters.

As for the third phrase, she read "Qingshui Zushi(清水祖師; Master of Clear Water)" as "青水祖師," once again missing out on the water radical in the first character. Of course, it was not uncommon to misread or to misinterpret the characters, but it was still odd and unsettling to miss so many in a row. As depicted in Image 2, the fourth phrase "Dao Jiao (Taoist practice; 道教)" was misinterpreted as "Jiao Dao (教道)." It became more and more apparent that something was wrong with Ms. T's finger reading skill.

The fifth and sixth characters "Lin Mo Niang (name of Mazu; 林默娘)" and "Yin Guan (reversal of Guanyin; 觀音)" were also misinterpreted. It was obvious that Ms. T's finger reading had become severely flawed. As a final confirmation, the character for "Fo (Buddha; 佛)" was tested. Over the past, the character Buddha and its associated characters have been repeatedly tested for over 50 times, and Ms. T had always either seen paranormal activity including shiny lights or shiny persons without fail. However, she did not see any paranormal activity this time, but had only seen the character's person radical (人). This confirmed that Ms. T had lost some of her finger reading skills.

I stopped the experiment immediately and asked Ms. T to go upstairs and to meditate. I also asked her to inquire her highly sentient guiding being in the information field, or what is commonly referred to as her "master" what was going on. Her master had replied, "They have come to interfere." In other words, certain spirits from the information field have interfered in our experiment, and intentionally interrupted our results. This both shocked and frightened us. How should we solve this? How do we get them to leave?

Fortunately, a priest was present at the time, who recommended to write some Esoteric Buddhism spells on a piece of paper, and for Ms. T to attempt to recognize the spells through finger reading. Therefore, we continued the experiment, as shown in Image 3. Only the characters "Miao" and "Xiang" were recognized from the eighth word "Miao Ji Xiang (blessings and good fortune; 妙吉祥), showing that the problem still existed. The ninth word was a Tibetan spell "Om Ah Hum," in which "Om" and "Ah" were written in red and "Hum" was written in blue. Paranormal activity had occurred then, in which Ms. T's cognitive screen showed red and blue lights, showing that she had recovered her finger reading skills. As expected, all subsequent tests yielded positive results, as shown in Image 4. Paranormal activities were perceived for all words, including "Buddha."

These phenomena indicated that when spirits joined in our experiments, their powers could interfere and interrupt in the display of the integration of a person's heart and mind. As a result, we had realized that when interpreting the experimental results of finger reading, in order to derive an analysis that was closer to the truth, whether spirits from the information field were present had to be treated as a variable.

We finally understood why experiments of extrasensory perception were difficult to repeat. As it turns out, there is an enormous, sentient world of spirits out of our reach behind them, and some spirits may choose to join or to interfere with our experiments. How can we can get rid of such interference? Through prayer? Chanting the scriptures? Burning incense? Through holy water? or chanting spells?

III. External Interference Should Cease So Long As We Remain Righteous and Seek for the Truth

Subsequently, we asked Ms. T's master for ways to respond to external spiritual interference. The master informed us that whether interference would occur was dependent on how focused we were. Therefore, we need not worry of interference if we remained righteous and committed on seeking for the truth.