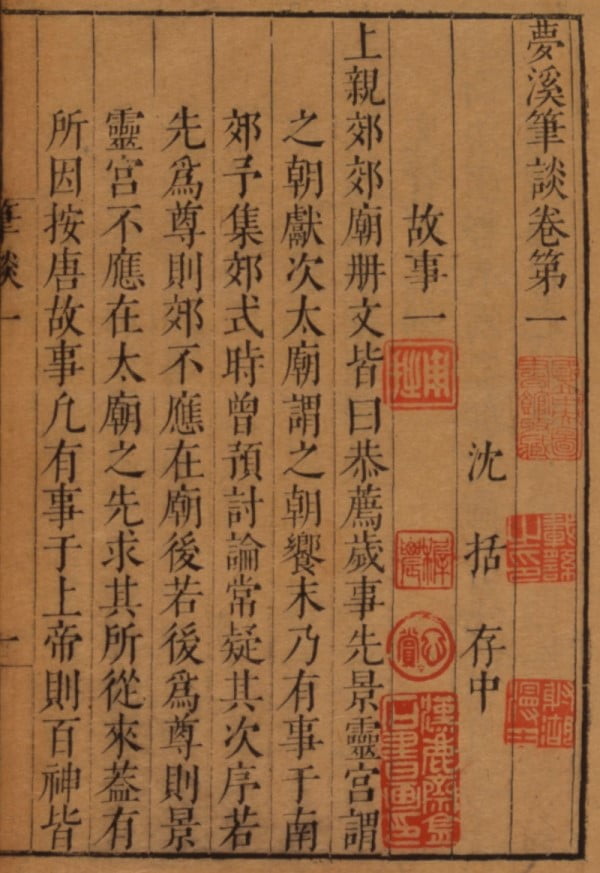 In October 1997, the fourth"Chinese Somatic Science Conference"was held in Beijing, and hundreds of researchers on somatic science from China, Japan, and Taiwan had gathered at the Beijing City Library for a three-day conference on the latest research results on extrasensory perception (ESP) in humans. In October, the wind was already biting in Beijing and the temperature neared zero degree Celsius. Nevertheless, the venue was warmed by passionate debates, and everyone was anxious for new findings and surprises. Everyone was filled with a sense of pride and mission, for leading cutting-edge science and pioneering mankind to explore the wonders and myths of the universe within our anatomies.

A middle-aged man of medium build and a kind face approached me with a stack of papers at the venue. He wanted me to look over the papers, and to publish them in Taiwan if possible. He introduced himself as Chen Taoqiu, an electrical engineer from Shanghai. A sense of familiarity and kinship rushed over me upon hearing his electrical engineering background since I, too, had studied electrical engineering. There must be some exciting stories behind his switch from electrical engineering to somatic science. I briefly flipped over the pages. They were a collection of ancient Chinese scripture, and contained instances of "clairvoyance,"  」、「 "emotional therapy,"  」、「"preventive forecast,"」、「 and "superintelligence." He had an intriguing title, namely, "Ancient Experimental Science on Somatic Science," which piqued my interest, and I carefully listened to his publication. It turned out he has adopted Dr. Qian Xuesen's viewpoint:

Ancient literature is a documentation of people's past social behaviors, and could also be seen as notes to their experiments. ….After identification, abstraction, and revealing the truth, it could be referred to as "Ancient Experimental Science," a study on ancient experiments.

One of the important tasks in ancient experimental science is to use modern scientific experimental techniques to research and verify the meanings of various ancient literatures in contemporary technology. For example, the earliest new supernova explosion in human history in 185 A.D. was documented in "Han Shu: Tianwen Zhi" (Book of Han: Astrology). The oracle bones at the remains of Yin dynasty showed records of a solar eclipse in 1302 B.C., which was evident for the Earth has slowed in its movement over the last three thousand years.

Mr. Chen Taoqiu graduated from Tsinghua University in the 1960s. He was already interested in overseas research on the applications of brainwaves in human potentials at the time, and decided to commit himself to bio-electrical studies. In the 70s, he seized the opportunity of President Nixon's visit to China to bring traditional Chinese acupuncture and acupuncture anesthesia to the world, and successfully applied for a province-grade research grant. Thereafter, he successfully developed a high-sensitivity "dual-band physiograph" and returned to Shanghai to produce equipment. He was very interested in the ancient literature on psychological remote sensing, and after long-term data collection and analysis, he came to believe that "various human potentials were not contemporary miracles and did not need to be imported from abroad, since large quantities of accurate record could be found from China's vast historical records. Since they had once existed in history, they were bound to still exist in the present. We could verify its validity through social research and laboratory experiment and to obtain proof." This is what he referred to as "Ancient Experimental Science on Somatic Science."

Mr. Chen's book ultimately could not be published in Taiwan due to various reasons. However, after much review, Shanghai Jiao Tong University Press finally approved of the publication of his book "Case Studies on Human Potential" in December 1998. From more than a thousand of records, he selected 318 case studies from ancient Chinese classic literature, local lords, and notes, and published them in three parts according to time sequence. He also added quotations, bibliography, footnotes, and translations of the literature in this precious compilation designed to understand the extrasensory perception (ESP) in ancient times. Let us look at how human potential played crucial roles in history in two time-honored examples:

《The third book of "Shi Ji: Yin Ben Ji (Records of the Grand Historian: the Yin Dynasty) recorded a magical story of how Emperor Gaozong sought for his Prime Minister Fu Shuo, who led his country to prosper. After defeating the Xia Dynasty and building the Shang empire, the capital was relocated for numerous times, and the country undergone various fortunes throughout the years. After shifting to the Yin Dynasty, the emperor's nephew Wu Ting (1271~1213 BC) had assumed the role of Emperor (referred to as Emperor Gaozong), and he began to think of ways to rebuild his country, but he lacked for a decent subordinate. For three years he let his government reign while he secretly observed the country and its people.

One night, Wu Ting dreamed of a wise man named "Shuo," who was not a part of his government. After dispatching hundreds of officials to search for the wise man throughout the country, "Shuo" was finally found. At that time, he was a slave who was building a tunnel at Fuhsien (present day Shanxi), and he was taken to meet Wu Ting at the capital. Upon seeing him, Wu Ting immediately said, "This is who I dreamed of," and named him the Prime Minister. And Yin Dynasty had prospered thereafter. He was also granted the surname "Fu" after Fuhsien, the place where he was found. Such instances of seeing people in dreams are called clairvoyance, a type of extrasensory perception (ESP). Emperor Gaozong of Yin Dynasty had used human potentials to lead his country to prosperity.

《Book 105 of "Shi Ji - Bianque Canggong (Records of the Grand Historian: Biography of Bianque and Canggong" told of the ancient Chinese physician Bianque (also known as Qin Yueren), who lived at around the same time as Kong Qiu. After taking the secret medicine from Chang-Sang for thirty days, Bianque became capable of seeing persons at the other side of the wall. Thereafter, Bianque had been able to view his patients' intestines and pin-point to the locations of their illnesses. In other words, Bianque possessed what was known as the "heavenly vision" among the Six Powerful Senses in Buddhism, or clairvoyance, a type of ESP found in certain people.

As it turns out, the reason why Bianque, a physician who had been revered for the past two thousand years in China for his skills, was because of his ESP. It is also interesting that in the four ways of diagnosis in practicing Chinese medicine, or "observe, smell, ask, and feel the pulse," physicians were asked to observe first. Perhaps this is also designed to include clairvoyance besides ordinary observation with our naked eye.

Let us choose three more cases in ancient times from the  "Case Studies on Human Potential" to explain about phenomenon of "telepathy," 》、《"precognition"》與《and "the coming."》的現象。

《Book 443 from "Song Shi (History of Song Dynasty)" documented Tang Bohu's telepathy for his dying father in northern Song. In year 1088, Tang Bohu's father had traveled to Hunan (south of Shanghai), while Tang and his brothers stayed behind to mourn for their mother at Zhoushan. One night, Tang Bohu woke his younger brother Tang Geng, stating that he had dreamed of receiving an expedited letter from their father, which only included the words "come quick." Worried that something may have happened to his father, Tang set out to rent a boat to see him in Hunan the following morning. The river had flooded at the time and boats were reluctant to leave shore. Tang Bohu finally convinced a boatman with a hefty payment. Two and a half days later, they arrived at Hunan. His father was indeed very ill, and was taken aback at the sight of him. Tang Bohu readied the boat and returned home with his father, who passed away a few days later at home.

Such phenomenon of sensing impending danger had been recorded for countless times in ancient literature, and I myself have heard of many incidents from friends and family as well as in journals and magazines. These incidents have no prior warning and cannot be repeated; therefore, they are not recognized by modern scientists. Nevertheless, those who have experienced it could feel an unforgettable shock and would no longer doubt its authenticity.

《Book 191 of "Jiu Tang Shu (Old Book of Tang)" documented renowned physician Sun Simao's precognition ability during the Sui and Tang Dynasties. Sun Simao had wanted to become a scholar since he was a child, and he was knowledgeable in Zhuangzi, Laozi, and other literature disciplines as well as Buddhist classics in his twenties. Emperor Wen from Sui Dynasty and Emperors Taizong and Gaozong from Tang Dynasty all repeatedly wished for him to join their governments, but he had turned down all offers. He compiled medicinal theories and clinical experiences before the Tang period and collected a wide array of prescriptions and acupuncture methods, and penned the world-famous "Qian Jin Fang (Invaluable Methods)," a thirty-scroll collection that documented women's and children's illnesses and promoted classification of liver and intestine diseases, thereby making Chinese medicine more systematic. In addition, he was also known as "The King of Medicine ("Yaowang")" as he was the first to document the composition of gun powder in "Sun Zhen Ren Dan Jing (Elixirs of Adept Sun)."

He once prophesized the futures of the three sons of Vice Minister Sun Chu from Yandongtai, and the prophecies have been proven. He also prophesized the position that the young Crown Prince Zhanshilu Jiqing would assume in 50 years, and stated that his own grandson would serve the Prince then. At that time, his own grandson was not even born yet; nevertheless, these events had all been proven later on. Starting from Bianque, it seems that most of the renowned Chinese physicians throughout the years needed to possess certain human potentials and superpowers, which helped them to achieve and maintain their stature.

The phenomenon he observed are still widely talked about among the people. For instance, mediums are people who can be possessed by spirits and deities and communicate with the people to solve their problems. Yi Kuan Tao's medium practice can achieve the same results. Furthermore, my finger reading experiment can communicate with spirits as well, thereby answering questions to life, the universe, and science. These have all proven what Mr. Chen Taoqiu had stated, "Since they had existed in our history, they will invariably exist in the present."